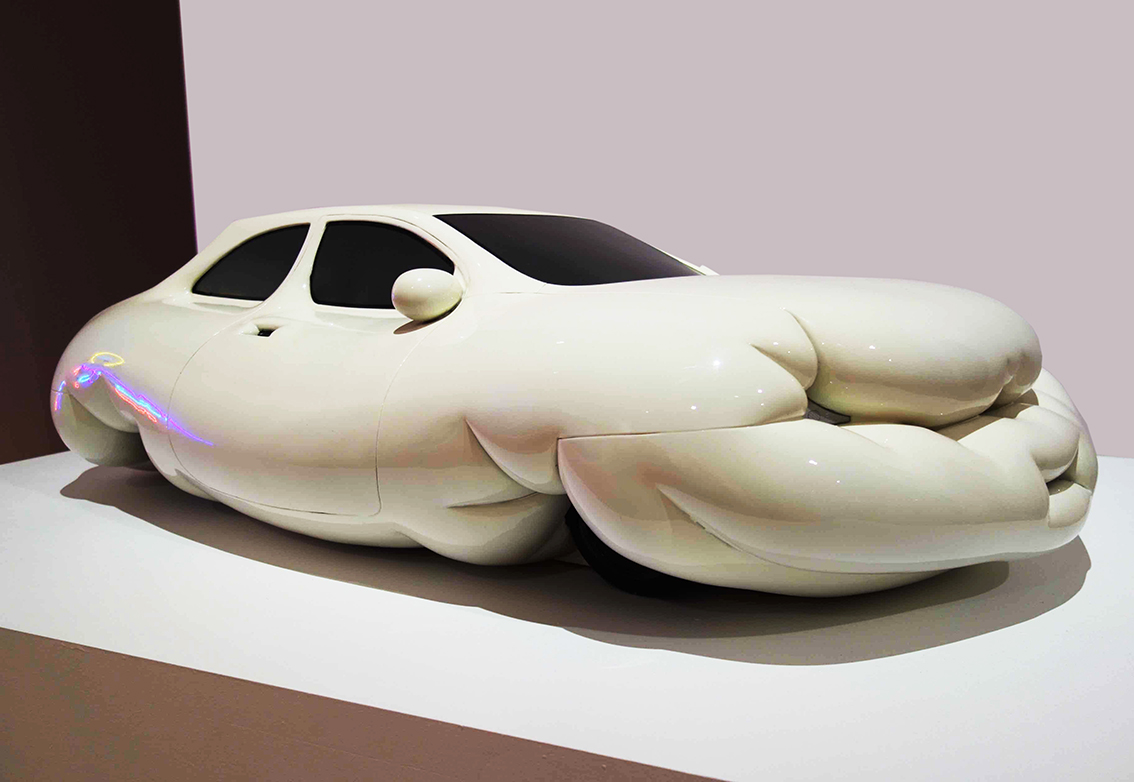 Ok, I admit it, I was not expecting great things from the art scene in Bangkok. I mean, in an Asian art world which is practically tripping over its own radical new contemporary art, Bangkok is remarkable, if only for its relative artistic silence. Or is it just quietly brewing up a storm? Even though Bangkok has a long way to go before it can compete with art capitols like Seoul or Hong Kong, in our quest to explore the global art scene for Produce UK, Catherine and I stopped off on our way to Tokyo and had a fantastic unhurried day exploring the city’s art galleries. Here are our recommendations.

What better place to start than The Bangkok Art and Culture Centre? And wow, it totally delivered. We left the fantastic riverside ShangriLa Hotel and after walking for a while up the bustling Chareon Krung Road in the searing heat, we flagged down a tuktuk, haggled a bit on price then off we buzzed through the colourful eclectic streets. Take a tuktuk in Delhi and you feel a similar adrenalin rush to jumping out of a plane – death may well be around the corner – but the great thing about tuktuks in Thailand is that you get all the fun without the butt clenching fear. 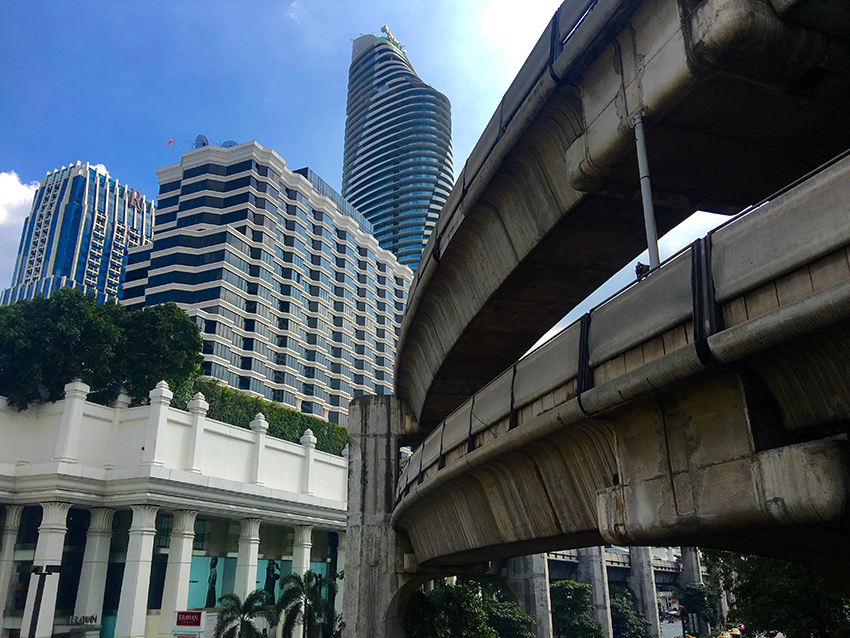 First impressions of The Bangkok Art Centre are that for a building that looks as though its been seemingly crammed into a bonkers skytrain, motorway, shopping centre, spaghetti junction, it’s remarkably well designed and easy on the eye. This probably has something to do with the 15 years it took for Thai Artists’ Network, desperate for contemporary art to be given a platform, to get the stop/start project off the ground. But, if the outside is great, the 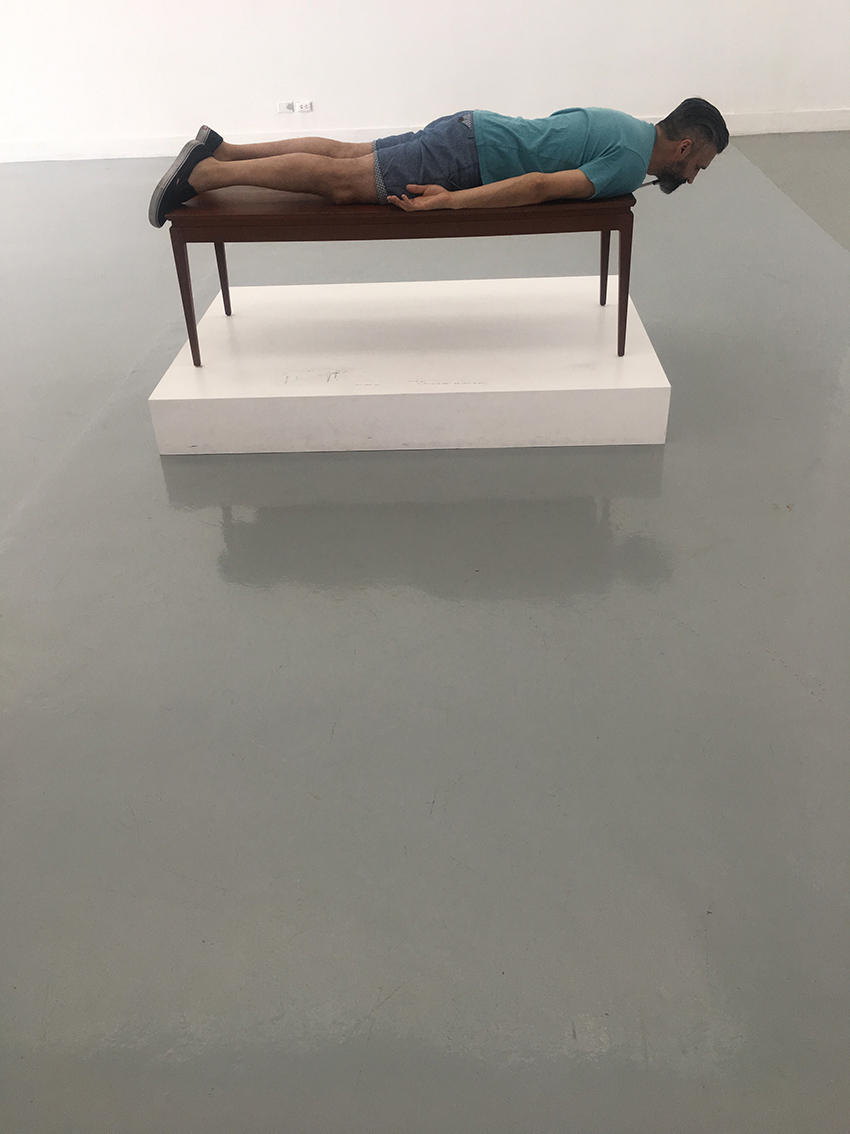 inside is a real treat. Robert G. Boughey definitely had Frank Lloyd Wright’s Guggenheim Museum New York in mind when he put pen to paper,  and there is a magnificent sense of scale to the cylindrical six-floor atrium. We took the escalator to the very top to find a breathtaking Erwin Wurm exhibition, which even though conceptual, felt warm, inclusive and witty. Erwin Wurm, an Austrian artist, is a brilliant, brave and forward thinking choice for a state sponsored gallery, and the show was intelligently curated, making use of the huge, naturally lit circular space.

Erwin Wurm, an Austrian artist, is a brilliant, brave and forward thinking choice for a state sponsored gallery

As we spiralled our way down the building, the walls were lined with thousands of public Instagram images relating to the late King Bhumibol Adulyadej, and it seems that with the nation in mourning, art relating to the King is absolutely everywhere in Bangkok, including the super swanky Siam Discovery shopping centre next door, which had a vast LED portrait of the King, that responded to the viewer’s presence. 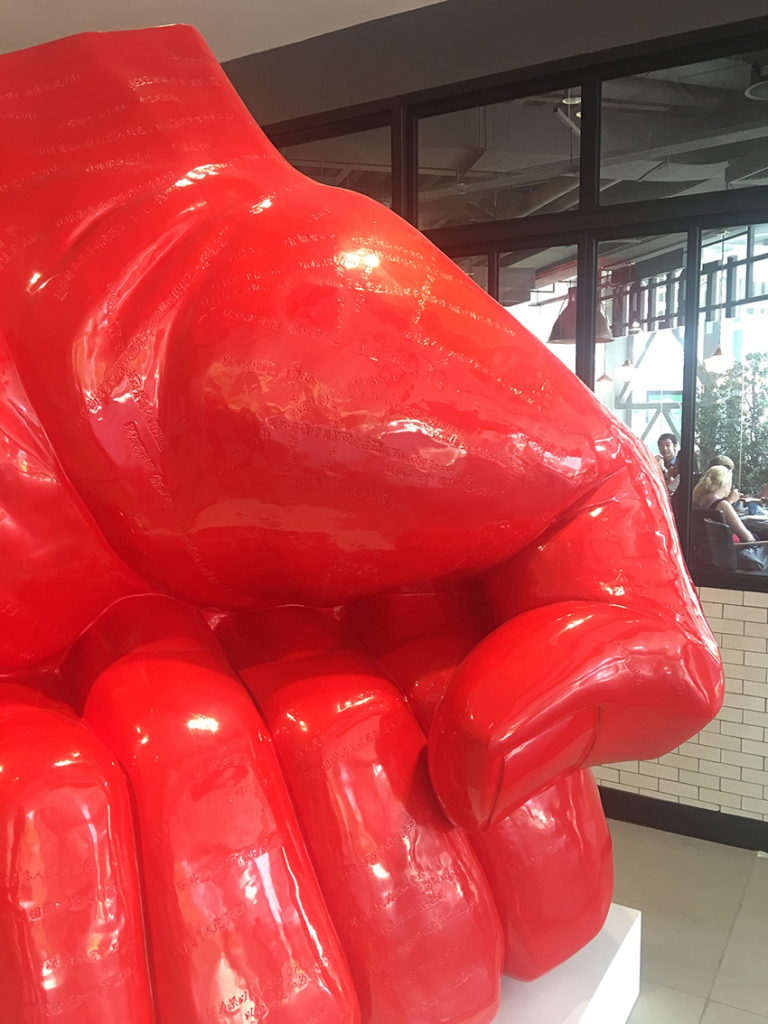 We eventually found The Adler Galerie, which appears to specialise in Asian pop art. It was good fun and well worth the detour, if only because Siam Discovery shopping mall is classy, extremely well designed and full of great eateries. The highlights of the gallery were a giant fibreglass red fist smashing into the ground, by Chinese artist Liu Bolin, and a small sculpture of an Asian man  pushing an empty shopping cart by Manit Sriwanichpoom. This man, dressed in a bright pink suit has become an iconic figure in Manit’s art, a man who appears in often violent scenes, dispassionately looking on like a Deity. One painting that also really caught my eye was called In The Shadow II by Atassit Pokpong, who is considered one of the rising stars of Thailand’s contemporary art scene. It was a large scale portrait of a mysterious Asian woman. Typical of his style, Pokpong often uses a contrast of pale colors for his subjects’ faces and dark for backgrounds or sheer fabric, with vivid highlights for the lips and hair, in this case gold, giving a striking effect.

Heading East on Rama 1 Road, we were fascinated by the brutalist concrete elevated Skytrain and walked along the raised pedestrian concourse, towards 100 Tonson Gallery, situated amongst the impressive embassies on Tonson Alley. Once again, 100 Tonson Gallery did not disappoint. Yuree Kensaku, a Thai-Japanese artist had taken three and a half months to create a multi-textured technicolour mural which filled the entire space. Even though this was a painting, it had the affect of overloading the senses in a playful but profound way. Among her many exhibitions Yuree Kensaku had also been a 2013 contributor the incredible BUKRUK Street Art Triennial in Bangkok, which took place again in Jan 2016.

From 100 Tonson Gallery, we walked through the tranquillity of Lumphini Park, hoping to catch a glimpse of its famous giant monitor lizards casually wandering around. There used to be over 400 of the reptiles roaming the park, until in September 2016 the authorities set about removing them to sanctuaries because of tourists being scared out of their wits or crashing their bikes. We were rewarded for our diligence and it was such a great feeling seeing this magnificent creature languidly crossing our path.

Continuing the theme of surprise, we walked to an unassuming road called Prasat Suk Alley, which looked quite dingy until we passed through the gates of YenakArt Villa. This stunning white modernist building looked as though it could have been designed by Mies van der Rohe. The expansive pillared space teemed with natural light and was a perfect neutral environment for the eclectic, beautifully crafted sculptural works of Thai artist Sivadol Sitipol. Working in stone, marble, bronze and brass, Sitipol creates surreal objects (some nearly five metres tall) that at first seem familiar, as if liberated from an archeological dig, but prove to be just out of reach of explanation. From here we grabbed a taxi back to the Shangri-La Hotel, ordered a long mojito and watched the beautiful sunset, feeling tired from all the walking, but extremely happy with the day.

So there you have it.. and I’m not saying that Bangkok doesn’t require some serious digging around in order find the excellent exhibition spaces, but we found that the hunt was extremely rewarding, and provided a satisfying day that was well off the beaten track. 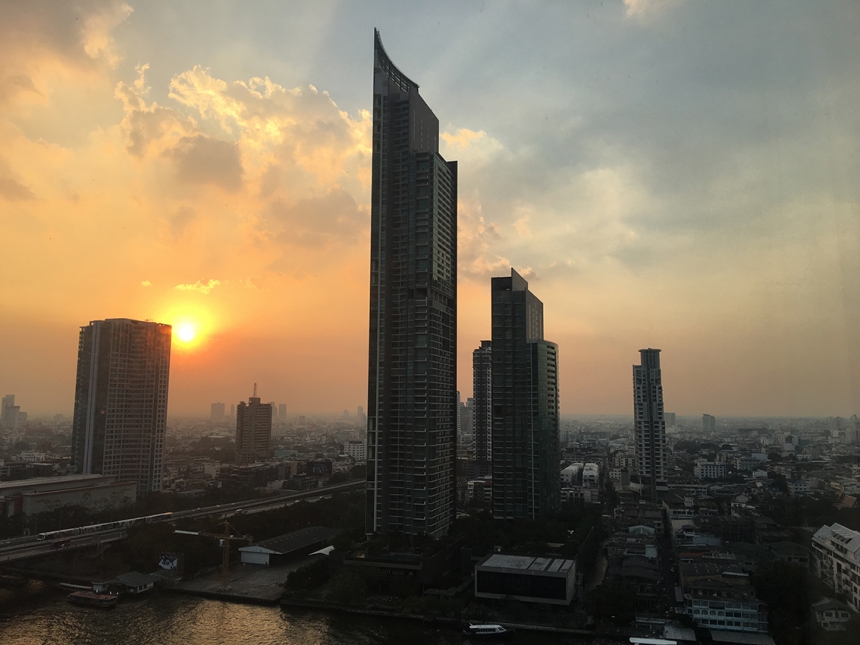