With cities increasingly challenged for community space, and quality of life being at the forefront of many urban dwellers’ minds, there are numerous forward thinking and innovative ideas for inner city space creation being floated, but a London project that really inspired us was The Camden Highline. This is an idea for a new public park, created by transforming nearly a kilometre of disused elevated railway lines linking the world-renowned Camden Market with the newly redeveloped King’s Cross area. 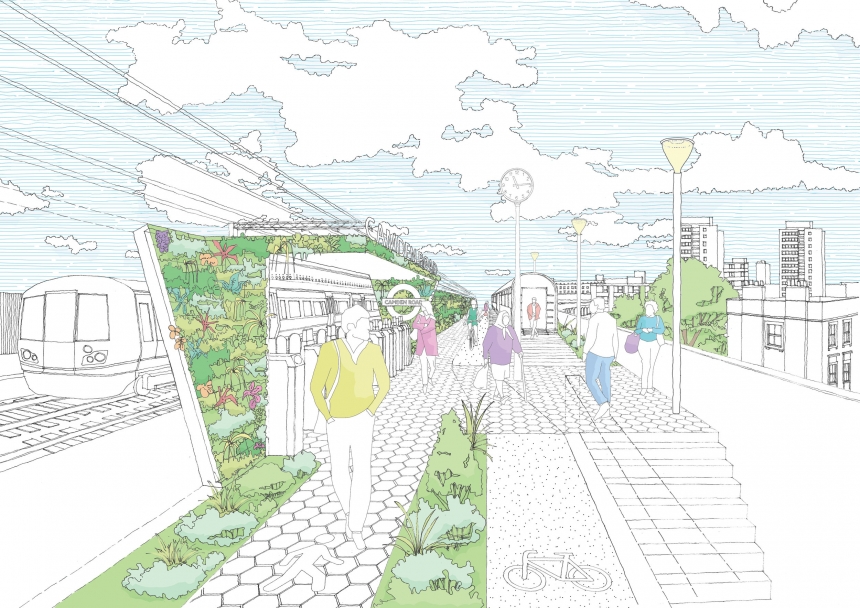 Camden Town Unlimited has started a crowdfunding campaign to take the project to the next stage, which means carrying out more detailed feasibility work, and such is the enthusiasm for the project that they are nearly at their £37k target, with the Mayor of London, Sadiq Khan himself donating £3.5k.

“People in Camden have been talking about this for years. Now we’re putting our money where our mouth is to make this happen,” said Camden Town Unlimited Chief Executive Simon Pitkeathley about the campaign. “We invite anyone who wants to see a New York-style Highline here in London, whether you live and work in Camden or are a visitor to the area, to donate what you can to help make this idea a reality.”

Last year Produce UK visited the incredible New York Highline and since its opening in 2009, the astounding success of this urban park has inspired several other cities to follow in its train tracks. The Good’s Line in Sydney, Rotterdam Hofbogen, Philadelphia’s Reading Viaduct Project, and “The 606” Bloomingdale Trail in Chicago, and now The Camden Highline are all taking New York’s lead and utilising dead space to transform these cities and improve peoples’ lives.

Produce are very much behind the fantastic Camden Highline project, and we wish it every success, but it’s also worth noting that they have an opportunity to learn from New York Highline’s mistakes. The New York Highline was intended to be a park for the neighbourhood, but no-one could have anticipated the enormous draw it was going to have for tourists and developers. Like many successful developments it has driven up rent and property prices, which has actually created huge concern for the residents, especially those in public housing projects, two of which are at either end of the High Line.

The Friends of the New York High Line is the non-profit organisation that has launched several initiatives including job-training programs for teens, education for kids, working with the public housing projects to develop programming specifically for their residents. However they acknowledge there are some things which could have been done at the beginning which are impossible to go back and correct, especially advocating for public housing. Hopefully in Camden’s feasibility and consulting process they will bear these issues in mind, in order to create a fantastic urban oasis for everyone, in the great city of London.